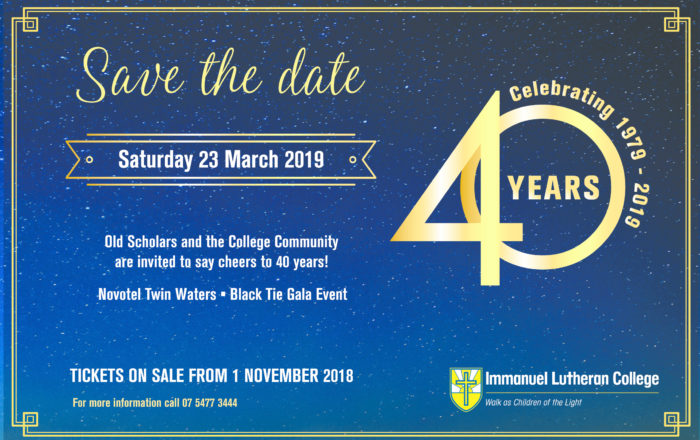 On 23 March 2019, staff, parents and Old Scholars of Immanuel Lutheran College will come together and say ‘Cheers to 40 years’ as they celebrate 40 years of Lutheran education on the Sunshine Coast.

At a black tie gala event at Novotel Twin Waters, Old Scholars from around the country and overseas, will return to their alma mater in a show of support for the first independent Prep to Year 12 College on the Sunshine Coast

“Lutheran education began on the Coast with the opening of Sunshine Coast Lutheran Primary School in January 1979 on a 13-hectare block of land in the Buderim foothills, ably led by Principal Mr Norm Auricht. It was a modest start with only 80 students,” said Principal Colin Minke.

“Immediately, the question then asked was ‘How about a high school?

“In October 1980, Immanuel Lutheran Church went ahead with building a secondary school, built on the same site, with classes commencing at the beginning of 1982 under the leadership of inaugural P-12 Principal Dr Adrienne Jericho

“On 27 January 1982 at 8.40am, Immanuel Lutheran College began operating with 63 students and five staff, summoned to an opening devotion led by Rev. Ken Thamm. This took place in the basement of Stage 3 of Sunshine Coast Lutheran Primary School,” said Mr Minke.

“Those were the days of parents turning out for working days and there were many years of ongoing development as building after building went up to keep pace with demand.

“Today, Immanuel is still a building site as we’re currently investing more than $9 million into our Primary School to ensure we have the latest in equipment and facilities to keep up with growth, and ensure our students are prepared for the demands of 21st century learning. With a further $30 million planned in development over the next decade, Immanuel will be well placed for the next 40 years. Keeping in mind we’re preparing our Prep students for jobs that haven’t been created yet, it’s vital as educators that they have the skills and resilience to face the challenges that lie ahead.

“With nearly 950 students, we’re soon to open a new $2 million Environmental Centre which all students will experience for themselves when they get to use wet labs on the verge of Immanuel’s precious 20-acre rainforest.

“Academically, 40 years’ experience has ensured the College achieves above state averages in NAPLAN and OP results and around 97% of graduates achieve either their first or second university preference.

“However, what has always been at the core of Immanuel’s teaching philosophy is the belief that every child is unique and that children learn best when their education is enriched by memorable experiences – not only in the classroom, but with nature through outdoor education, on the sporting field or the many other opportunities presented during their years of schooling.

“I invite current parents, past parents, Old Scholars and staff to come together and celebrate Immanuel’s 40th anniversary; to celebrate a vibrant community that began with only 80 students in the Buderim foothills all those years ago,” said Colin.

“It will be a gala event not to be missed on our calendar next year.”

Tickets are on sale now and can be purchased here. 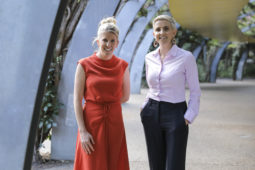